Bouldering in the winter can seem daunting and unconventional. We often use these cold seasons to embrace alternative forms of climbing. Digging out crampons and axes from the depths of gear piles we layer up and head out towards bold new objectives. For climbers who haven’t procured the necessary knowledge or who merely lack the desire to experience screaming barfies for the first time, we retreat towards the comfort of gyms. Fortunately Calgary’s chinooks bring hope to those who have been hiding in gyms reminiscing on the memories of warm days and dry rocks. 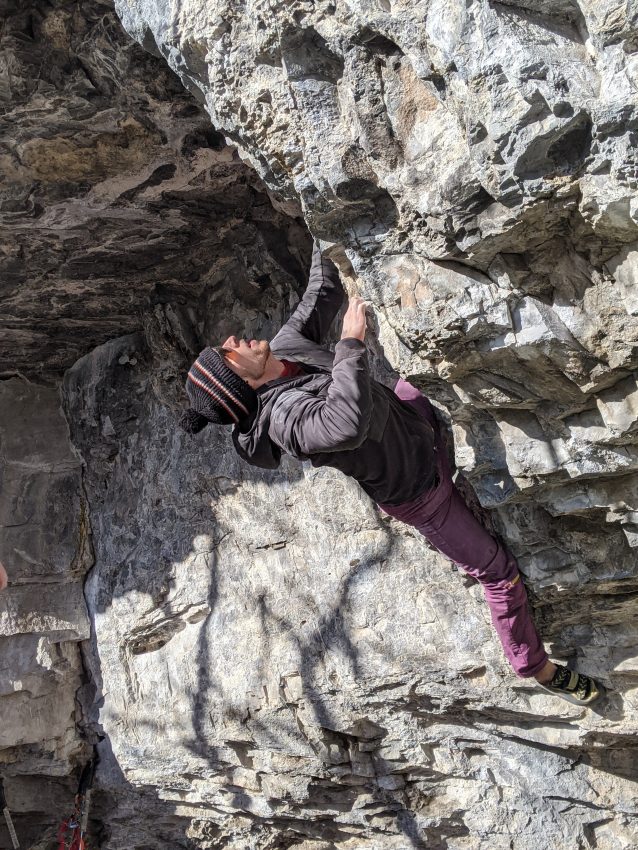 In 1996 while mountain biking on the Powderface trail, Daren Tremaine dismounted to unlatch an old gate. As he took in the view he caught sight of the cliff bands on the south facing slope. Upon further exploration he and Ryan Johnstone found the cliff band we now call White Buddha. Along with Rich Castillo, this trio were the first to establish problems here. While most of the mountains lay frozen White Buddha stood out. Named after the rock scar on the opposing valley, this west facing ridge acts as a suntrap permitting climbers to enjoy the rock virtually year round.(Dave Rone, Tom Gnyra n.d.)  Realizing that rock climbing was available in the Rockies throughout the winter seasons was the end to ice climbing for Ryan. (Ryan Johnstone, 2021)

This limestone face features everything from pocket filled slab to overhang and roof features. It is the premier of winter bouldering (team CANrockies n.d.). The crag also offers some short rope lines, providing options for your preferred climbing style. The unique roofs help the rock remain dry, even succeeding snowfall and light rain. White buddha offers diverse and challenging boulder problems ranging from V2 to V10. The wide range in grades make it a welcoming destination for climbers of all abilities. Many of the boulders along the cliff band have been mined out and rolled down the hill to help create a flatter fall zone. Left Potato Bonda and The Hasselhoff Arete were two of the first difficult lines that Ryan put up. Establishing routes and getting first assents was competitive, but in the most amiable way. It was a perpetual race to see who could get the climb first and how fast others could repeat it. Despite this Ryan says they can barely remember who climbed what first. Everything from cleaning a route to coming up with new beta was a team effort. The trio were all very close in ability often repeating routes the first day they were ascended. However Hammer Delux and Hammer Royale are two of Ryan’s proudest accents at Buddha. Taking five Sundays in a row they required a lot of effort to complete. While Daren, Rich and Ryan were the first to put up most of the easier lines, Kevin Wilson came along later and did most of the really hard lines. Jon Jones put up the first sport climbs and Glenn Reisenhoffer added more sport climbs later. (Ryan Johnstone, 2021)

Approaching this crag can be an adventure on its own. The short hike offers icy switchbacks in the morning and a mudslide-like path once the sun hits the hill. Despite winter conditions this path has come a long way from when it was established and can now be seen by google earth. Wearing spikes or having hiking poles are beneficial on the descent if you aren’t sure footed. To add excitement to the approach many climbers bring toboggans or crazy carpets to haul their pads until they hit the switchbacks. While I wouldn’t advise trying to sled down the mountain side, the small rolling hills on the wide path make for a fun ride. As you approach the sun kissed cliff band take a moment to turn around and take in the view of elbow falls from just across the highway. (Matt Ford n.d.) The temperate weather and gorgeous views are only a fraction of what makes this crag exceptional. 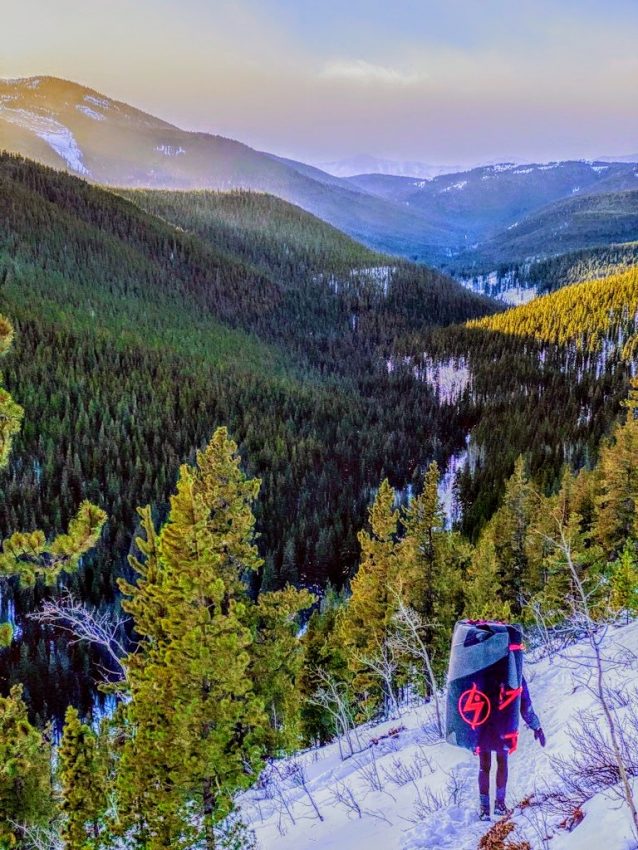 Brooke Norton on the descent

Calgary Climbing Centre ClimbParks - Two of our facilities have ClimbParks. CCC Hanger (in the north) and CCC Rocky Mountain (in the west).

BLUESIGN is a holistic system that provides solutions in sustainable processing and manufacturing to industries and brands. Based on strict criteria,